Dauntless is a free to play action role playing game from Epic Games and developer Phoenix Labs. The game has been compared and is said to be inspired by Monster Hunter. It takes place in a fantasy game world known as the Shattered Isles. Following a cataclysmic event, the world has been besieged by gigantic creatures the size of dinosaurs called Behemoths. These Behemoths prey on the humans that survived the event. Players take on the role of a Slayer and try to bring down the Behemoths. The game was released in 2019 for Windows PCs, PlayStation 4, Xbox One and Nintendo Switch.

In Dauntless players will take on the role of a Slayer and will need to explore the game’s environment to collect resources, craft weapons and items in order to bring down the Behemoths. Players will be able to craft hundreds of different items and weapons. The weapons and items can be combined to create more powerful combos and attacks. 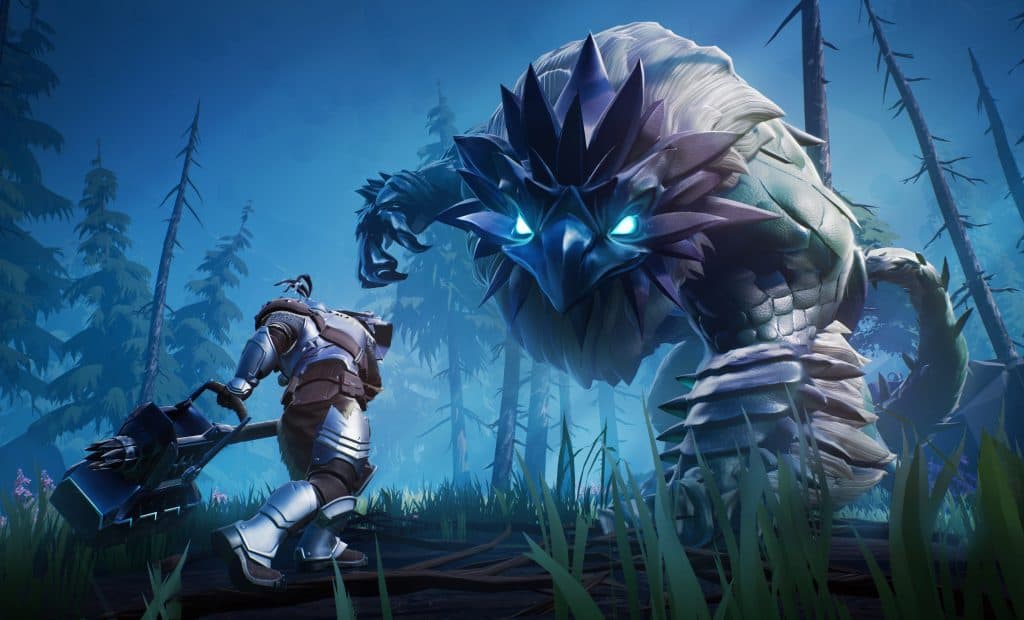 A Slayer fighting a Behemoth in Dauntless

The game includes a single player game mode as well as a co-operative multiplayer mode with up to four players. Game play is from the third person perspective similar to other popular action RPGs such as The Witcher and Monster Hunter.

The city island of Ramsgate takes on the role of the Slayers home base. It is from here that players will accept and find hunts to go on to fight Behemoths. They can also upgrade weapons, find friends and more. Once the player has found a hunt they will be taken to the Shattered Isles via a flying ship with 3 other players. Once dropped off it’s a dash to collect resources, craft and fight the Behemoths.

Players will level up and unlock items through hunts and this will allow them to become more powerful but they will also take on hunts against more powerful Behemoths.

Dauntless is completely free to download and play. The game does have micro-transactions that use real money which unlock new skins and cosmetic changes to your character. These transactions are not required and players will have access to 100% of the game without having to pay any money.

Dauntless is only available through Epic Games digital distribution platform. You’ll need to install Epic Games and create an account before you are able to download and play the game.

How Free Is Dauntless ?

Dauntless is free! You should not have to pay anything in order to play.

About Dauntless Dauntless is a free to play action role playing game from Epic Games and developer Phoenix Labs. The game has been compared and is said to be inspired by Monster Hunter. It takes place in a fantasy game world known as the S...
6.9
Average User Rating
12 votes
Rate This Game!
Your Rating: 0
Submit
Write A Review
Genre:Action Role Playing
Free Guage:Completely Free
Platform:PC, PlayStation 4, Switch, Xbox One